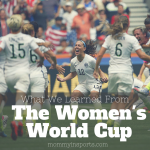 This past month America has been focused on the women of the soccer world competing for the 2015 Women’s World Cup. The U.S. Women captured their first World Cup Title since 1999, defeating Japan in commanding fashion 5-2. Carli Lloyd carried the team in the first half scoring the fastest hat trick in FIFA’s World Cup history, Read Post